The Euro Stud was designed for the Meopta and other similar styles of European Optics.

Which Stud Do I Need?

For best results type your exact binocular model and make sure to find it in the compatability chart. If you do not find your model, please give us a call and we'll be happy to help.

I purchased the Euro stud and tripod adapter for my Meopta binoculars. I am from Australia, the service and back up support has not only been exceptional, it has been the most supportive I have ever received.
I used this set up during a dear hunt for the first time recently and found it far far easier to attach and remove than my previous tripod adapter which needed to be screwed in and out each time. The screw was difficult to align with the thread at times, and removing and replacing the factory plastic thread screw was annoying, it was also only a matter of time before this would have been lost. I like how the Outdoorsman stud stays permanently in the binoculars, it looks like it was designed for this unit so I don't remove it. When placing onto the tripod attachment and detachment is quick and easy, one button is turned to loosen, you push it down and slide the binoculars in out, very fast and secure.
I'm unsure if I should share but I lost the stud on my first outing as I did not do up the allen key screw in the stud which holds it in place, when I ordered a replacement from America not only did Outdoorsman ship the stud free of international shipping charges they did not charge me for the stud either. To say they have gone over an above is an understatement as it was clearly my fault the stud was lost, thanks again for all the help, a very happy customer here in Australia, a fantastic lightweight but strong product which will stand the test of time (if installed properly).

The Euro Stud fit perfectly on my Cabelas Euro HD 12X50s (Rebadged Meopta Meostar HD). Outdoorsmans stud and adapter are the most efficient way to mount binoculars on a tripod that I have used. More expensive than some, but far more convenient than screw on adapters, as well as cleaner and sturdier than the other two piece adapters. 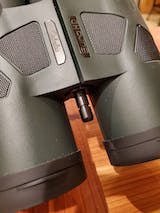 Full Disclosure: I’m not a doctor, but I do sometimes play one on date night! After 26 years chasing the same woman, there’s nothing better than getting behind some great glass, spotting that perfect rack, then stalking up on her…my unsuspecting prey…then POUNCE! Like a Mountain lion on an unsuspecting lamb! Never gets old (keeps her on her toes and keeps my spot’n’stalk skills on point!).

Thats where my Outdoorsman’s Bino studs come into play: these days for glass I’m running Meopta Meostar b1 Utra HD 15X56 for big eyes and Sig Kilo 3000 BDX 10X42 as a rangefinder. Both of these are great glass on their own, and can be used off hand, but to realize their full potential, they really should be mounted to a steady tripod. The Outdoorsman’s Bino Stud and Tripod Adaptors allow me to do exactly that in a beautifully simple and efficient way.

The bino studs and tripod adaptors allow one to stage their optics so they are ready to deploy in such a way that they can easily be mounted to their tripod in the dark, in the cold, even with gloves on. The Outdoorsman’s Bino Studs screw into Tripod adaptor ready optics by unscrewing the cover in front of one of the hinges, then screwing the Bino Stud into the optic (don’t forget to tighten the counter screw or add a tiny drop of thread locker to make sure the Bino stud doesn’t accidentally come loose with repeated uses). This basically becomes a permanent (though fully removeable) fixture on the front of your binos (think bayonet lug on the front of an M-16).

The Outdoorsman’s tripod adaptor (hopefully pre-mounted on your tripod) is set up, placed in the general area where you plan to use it, then the binos w/Bino stud attached are simple inserted into the hole on top of the tripod adaptor. There is a small amount of play in the spring detent above the hole on the tripod adaptor as it is depressed until the Bino Stud is inserted…then CLICK! It snaps into place and is secure enough for use. For additional security, the spring plunger has a collar that can be screwed down to lock the plunger in the “closed” position, preventing your optics from accidentally coming loose and falling (DOH!) and being damaged or ruined.

The design of this system is the best I have used for mounting binos to tripods, bipod, mono-pods, and window mounts. (I’ve spent 19 years working on the southern border chasing people- armed, un-armed, wearing camo, and sometime nothing at all, in all weather conditions and have spent hours and hours behind all kinds of optics in both daytime and darkness). It beats other adaptors that require that a stud be mounted into the optic because generally, they all require that the stud be removed after each use in order to detach the tripod adaptor. This repeated and un-necessary screwing (I know-bite my tongue right?) leads to either losing one of the screws, or cross threading…something…that renders your expensive glass, and valuable time ineffective, or worse, completely useless.

It beats the “Bino hand/tray” options (as long as you have a threaded hole for a stud) because the Bino trays aren’t conducive to multiple users since the Inter pupillary distance (…say that 3 times real fast) is basically set, then the binos are secures at that setting. New users have to remove the binos from the tray, adjust the …width…of the binos and re-secure them. This can really mess you up when looking at a moving object (2 legged, 2 wheeled, or otherwise) from a long way away.

I can’t recommend these enough, and most of the guys I work with use this exact system for all the aforementioned reasons. When we find something that works, when we find a piece of gear that makes our lives easier, word spreads like wildfire. Do yourself a favor and pick one (or two…) up. The knowledgeable staff at the Outdoorsman’s are always available to help you find the best setup for your particular situation.

Perfect fit for the new style Meopta Meostar B1 Plus binoculars.